On this page we will explain how to decode the stampers on a UK early Decca vinyl.,Typically an original 1964 UK Rolling Stones (Debut) record for our example. 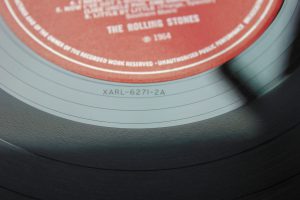 The Matrix and The Mother Stampers:

There are three different markings on the run off grooves directly linked to the manufacturing process:

The Matrix:
The Mother:
The Stamper:

This can be found at six oclock

‘A’ This is the letter identifying the engineer who created the Master Lacquer and supervised the whole process up to the stampers.

Below are the names behind all letters used by Decca.

This can be found at 9 oclock to the matrix:
In our example the mother is “1” which would be the first mother used to make the stamper.

Decca used the word ‘BUCKINGHAM’ for numbering of the Stamper. The first Stamper to be made from the Mother has the letter B, the next one has U etc.